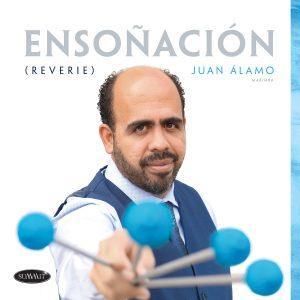 Juan Álamo is a marimbist on a mission–several missions, actually.

First, he wants you to fall in love with the marimba as deeply as he has–its dark hued tropical resonance, the dynamic subtleties, the ring’s slow fade into silence warmed by the passing overtones, its blazing, pointed, dancing accents: an instrument to cherish, a presence to reckon with.

Second, Juan’s musical personality aspires to delight you with expressive variety. The breadth of his musical loves brings together many genres, each one enhanced by his interweaving them all. Relish the detailed nuances unfolding from his insights into Bach’s well-structured composition, the delightful differences he points out in Beethoven’s Bagatelles, each one a miniature character study unique in style. (If you haven’t heard the ecstatic Latin Jazz rhythms of his CD, Ruta Panoramica, get it and put on your dancing shoes. You can’t not move to his pulse.)

Next, Juan loves to sing. Dreamy melodic inspiration is as natural to him as breathing.
”Come, sing with me,” he beckons.

Fourth, his marimba artistry honors the heritage of his Puerto Rican birthplace and the musical traditions his island’s people have offered to all peoples. Juan desires to give you his inheritance, to invite you into the captivating landscape of danzas, to enrich your world with his. Ensoñación is a crossroads between the gifts he’s received from his homeland and the musical talents he’s received from his Creator.

Juan puts imaginative power, analytical precision, and personally sensitive expression into every phrase, every dynamic, even into every note. You can hear his imagination at work each time his mallets stroke the rosewood.  Allow this musical missionary to entice you into the visionary realm he has so lovingly crafted for you. Enjoy !