Songs of a Wayfarer – Demondrae Thurman 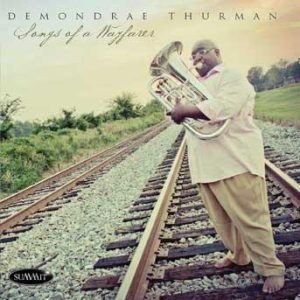 Songs of a Wayfarer pays homage to some of the songs which have influenced Demondrae Thurman’s playing over the years. You will hear the passion and expression in this music delivered with heart and soul. Demondrae Thurman is considered one of the stars of the formidable generation of brass soloists. His euphonium playing has been described as ‘awe inspiring’, and he is touted as ‘an amazing musician’.

Demondrae has a firm international reputation as a euphonium soloist having performed in France, Germany, England, Norway, Hungary, and throughout North America. Many of America’s premiere colleges and universities have hosted him as a performer and teacher and he continues to be in high demand. Demondrae is also an active chamber musician. He plays first euphonium and trombone in the highly regarded Sotto Voce Quartet which tours extensively.

If you are interested in purchasing an individual track from this cd, visit