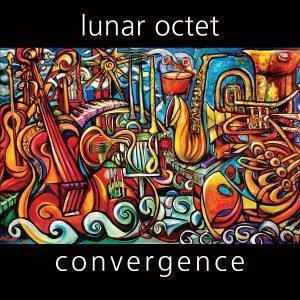 With Convergence, Lunar Octet has tapped into a new source of musical thrust and momentum. These grooves will take you to the moon and back.

Lunar Octet is back with a potent collection of originals inspired by mambo, samba, funk, Afrobeat and jazz! RED HOT!!

“More than 25 years have passed since Lunar Octet captured their funky brand of Afro-Latin groove on their first (and only) album, Highway Fun. The group now reunites for their sophomore release, Convergence (Summit), the album’s title describing their committed commingling of rhythms and styles as well as the gathering of the musicians, who had since gone their separate ways. First forming in the Ann Arbor/Detroit metro area in 1984, Lunar Octet (then known as the Lunar Glee Club), evolved from an Afrobeat jam band to a sophisticated jazz outfit with globe-spanning influences, thanks in large part to the writing and arranging of saxophonist Steven Hiltner. Most of the original crew, plus two new members — pianist Keaton Royer and second percussionist Olman Piedra — combine their skills on Convergence’s 14 sizzling tracks, a mix of brass-fueled samba, salsa, mambo and Afrobeat with a decidedly funky feel. Brandon Cooper’s flugelhorn sounds a bold introduction to “Samba Diabolico,” and he’s joined on the frontline by altoist Hiltner and tenorist Paul Vornhagen (also heard on soprano sax and alto clarinet). Pianist Royer offers a brisk and exciting solo, bolstered by bassist Jeff Dalton, drummer Jon Krosnick and the twin percussion of Piedra and Aron Kaufman. Building in intensity, the track proves Lunar Octet haven’t waned a bit in the decades since their previous recording.”

“Great stuff.  And you seldom get to hear something like this these days.  Perhaps because music that is not cutting edge is undervalued?  On the occasion of their comeback, the eight men of the Lunar Octet deliver the very best of arranging and Instrumental art. The brass section, featuring Brandon Cooper (Trumpet), Stephen Hiltner (Alto sax, bass clarinet) and Paul VornHagen (saxophone), cuts through the 14 tracks like a knife through butter.  The percussion armada (Jon Krosnick, Aaron Kaufman, Olman Piedra) weaves a shimmering rhythmic carpet from swing and samba, while Sam Clark’s guitar and Jeff Dalton’s electric bass will appeal to every radio listener.  Without a doubt, “Convergence” offers not just adrenaline-soaked music but also many fine nuances and even echoes of tango…”

Just in case you thought obscure but influential rock bands were the only ones who waited decades between releases, the Lunar Octet returns with Convergence, its first album in twenty-six years. Though a fixture at home, the band never really caught on outside of its Detroit/Ann Arbor base, and on the evidence of Convergence, it’s a puzzle as to why.

The songs (by saxophonists/clarinetists Steve Hiltner and Paul Vorhagen and percussionist Aron Kaufman) serve up memorable hard bop melodies over infectious rhythms, while the group’s interest in Latin and African music gives every cut buoyant grooves that make the songs danceable without being anything so crass as crossover. The woodwind players and trumpeter Brandon Cooper tend to lead the songs off with the main riffs, often played in harmony, as guitarist Sam Clark and pianist Keaton Royerprovide counter melodies and Kaufman, bassist Jeff Dalton, drummer Jon Krosnick and auxiliary percussionist Olman Piedra keep the tempos moving.

Hiltner’s “Toote Sweet” sets a good example, with a hip-swaying pulse, ear-catching melodies and expertly performed improvisations. Kaufman’s “Dancin’ in the Doghouse” (co-composed with Dan Ladzinsky) turns up the funk for an even more irresistible jammer, while Hiltner’s “Samba Diabolico” inverts its titular rhythm into a dense but delightful mass of catchy cadences. Kaufman’s “Heart of Congatar” dives into the deep end of the Afrobeat pool, while “Olduvai Gorge,” written by ex-member David Mason, indulges in some finger-snapping Latin jazz rock fusion.

If there’s one caveat, it’s that, at nearly eighty minutes, Convergence feels overlong. Then again, the musicians probably had a surfeit of material built up in twenty-six years, and most of it’s so good you can’t blame them for wanting to include all of it.

-Michael Toland for The Big Takeover

Formed in 1984 in Ann Arbor, a suburb of Detroit, the Lunar Octet became popular for its unique sound mixing Latin, Brazilian, afro-beat, and jazz. They released their debut album in 1994, performing at national jazz festivals and on concert tours. As the members walked their own paths, the group naturally disbanded. But it reconvened in 2014, and this CD was finally completed. With the addition of some powerful young talent on piano, bass and percussion to the original band members, the band has evolved with a variety of tight grooves, gorgeous three-horn arrangements, and solid solos.