Whispers on the Wind – Chuck Owen and the Jazz Surge 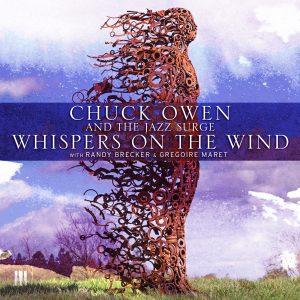 from this Special Recording:

-Best Arrangement, Instrumental for “All Hat, No Saddle”

Chuck Owen and the Jazz Surge, “Whispers on the Wind” with Randy Brecker and Gregoire Maret

“…an adventure communing with a different and far more primal and mysterious America–an America where there’s nothing out of place in the bent notes of guitarist Corey Christensen, the fiddling of Sara Caswell, the harmonica playing of Gregoire Maret and some guest trumpet by Randy Brecker. Owen quotes, two at a time, from three writers to introduce each selection on the disc –Stephen King, Cormac McCarthy and Larry McMurtry. Here is a sample: Owen introducing a piece written for the Air Force band with quotes from King and McCarthy. From King “It was possibility of darkness that made the day seem so bright.” From Cormac McCarthy in “The Road”:  “You have to carry the fire,” “I don’t know how to.” “Yes, you do. Inside you…I can see it.”

With “Whispers On the Wind” (their first recording since the two-time Grammy nominated “River Runs”), Chuck Owen & the Jazz Surge, having shed the orchestral trappings characterizing the prior ambitious work, would appear to have returned to a more standard jazz big band outing. “Whispers”, however, is anything but standard big band fare!!

Owen’s influences have always been eclectic – grounded in the jazz tradition, but freely associating with other genres from classical and rock to American folk and roots musics. This project expands upon that – keeping the big band omnipresent – but leaning heavily on the evocative violin of Sara Caswell, the luminescent harmonica of Gregoire Maret, an array of acoustic guitars deftly played by Corey Christiansen, and even the occasional burst of color from the accordion and hammered dulcimer played by Owen himself, creating a sound that is buoyant, intimate, and coming straight out of the American heartland. Randy Brecker, last appearing with the Surge on “A Comet’s Tail”, returns with a blistering solo on “Into the Blue” as well as a rollicking turn on “Gunslingers” – a somewhat otherwordly, Horace Silver minor blues.

As with River Runs, “Whispers” was conceived by the composer as a single entity – a suite of 7 pieces linked by a somewhat ethereal vision and examination of the American tradition & lifestyle. . . . . . . its values, landmarks, folklore, heroes, and myths. Associating quotes from authors Stephen King, Larry McMurtry, and Cormac McCarthy with each piece, Owen’s music displays a clear affinity for the local color, wry sense of humor, unique personalities, strong sense of place, and disarmingly unsentimental honesty these authors are noted for.